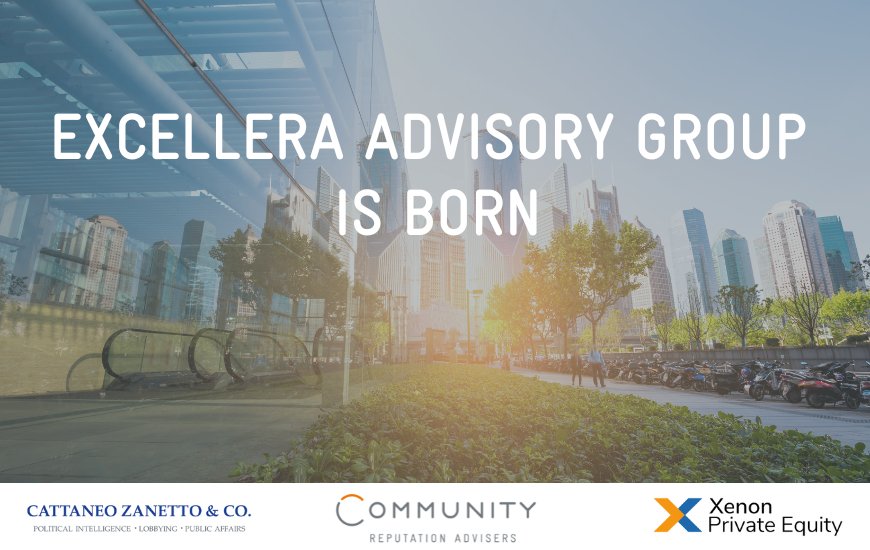 Cattaneo Zanetto & Co., a leader in Government affairs services, and Community, a leading firm in Communications and Reputation management services, today announced that they have joined forces to create the holding company Excellera Advisory Group.

The name chosen for the new company, Excellera, best represents the DNA of the two firms, inspired by the highest standards of excellence, combined with the ambition to accelerate together with its customers in dealing with critical moments, challenges or opportunities, in the financial, political and social arena. The two brands remain independent, keeping the current governance.

The deal brings to Italy for the first time the global best practice model of the sector: thanks to the financial and strategic support of Xenon Private Equity, this agreement is in fact the first step towards the creation of a wider aggregation of professional firms to compete, as a leader, also in Europe.

Excellera Advisory Group will have an aggregate turnover of over 25 million euros in 2022, positioning it at the top of the sector in Italy, and a staff of 140 professionals in the offices in Rome, Milan, Treviso and Brussels. Today, the Group serves more than 300 customers, including national and global leaders in key sectors: financial services, industrial goods, energy, healthcare, infrastructures, telecommunications and media, retail, platform economy, as well as non-profits, public bodies, trade associations.

Alberto Cattaneo, Claudia Pomposo and Paolo Zanetto for Cattaneo Zanetto & Co. will reinvest equally in the holding company and will retain their positions in the firm. Auro Palomba will remain CEO of Community and, together with Giuliano Pasini, Roberto Patriarca, Marco Rubino, Giovanna Benvenuti and Pasquo Cicchini, collected in the company Always On, will reinvest in the holding.

Auro Palomba, CEO of Community: “In over twenty years of life, Community has always stood out for being a pioneer in the sector, and this has allowed us to achieve the leadership in Italy in communications and reputation management. With this deal we bring to Italy a model that will provide us with the financial and industrial support to keep on growing and to acquire other firms domestically and abroad. With Cattaneo Zanetto & Co., whose founding values of independence, transparency and professional ethics we share, we bring to life a true national champion able of interpreting the Clients’ needs, offering strategic vision and operational support in the relationship with all the key stakeholders in the market.”

For Alberto Cattaneo, Claudia Pomposo and Paolo Zanetto, CEO of Cattaneo Zanetto & Co.: “Throughout the years we have established ourselves as the leading Lobbying and Government affairs firm in Italy, proudly contributing to the growth of the entire sector in size, professional skills and transparency. Thanks to the trust of our Clients, we have first built a successful case history, then attracted the attention of important financial and banking investors, so now we can face the new challenge of creating a national champion capable of competing also on international markets. The birth of Excellera Advisory Group renews this pact of trust with our Clients, providing them with new services, new skills and guaranteeing, together with Community, the ambition to excellence which has always been our signature style.”

Franco Prestigiacomo, CEO of Xenon: “Our trait is to be financial investors with a strong focus on industrial issues that accompany entrepreneurs to build national champions in fragmented sectors. All over the world, the main Government and Reputation affairs firms have received investments by funds that support their growth also through acquisitions. We started from the two best Italian firms in each one’s sectors, Cattaneo Zanetto & Co. and Community: Excellera will be a platform on which we will build an excellence in the sector, in Italy and abroad, adding other advisory champions”.

The Xenon team that worked on the deal includes Gianfranco Piras, who will become Chairman of Excellera, Giorgio Pastorelli and Francesco Banfi.